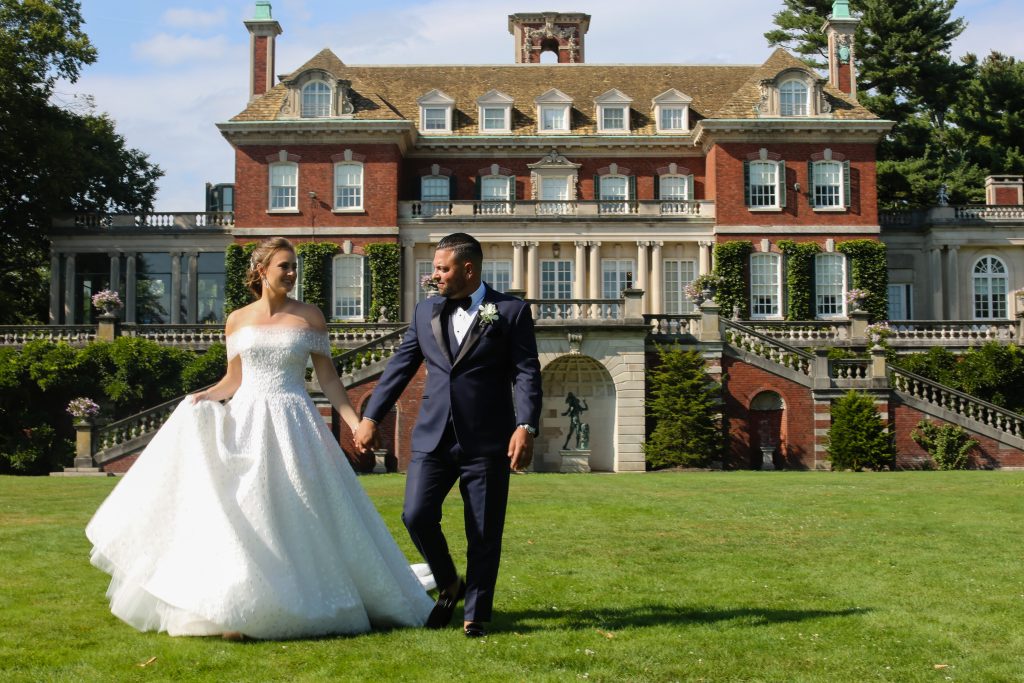 This past September, one of our very own Kleinfeld employees got married! Michelle had been working as the Production Manager (she handles making sure your dress is ordered and made properly and in time for your wedding!), for 8 years before her now husband, Jared, proposed this past winter. How was the girl, who has personally reviewed thousands of wedding dresses in her career, going to pick the dress of her dreams? Read on to learn all about Michelle’s shopping experience, dreamy wedding day, and how Jared set up an extra special surprise at their reception! 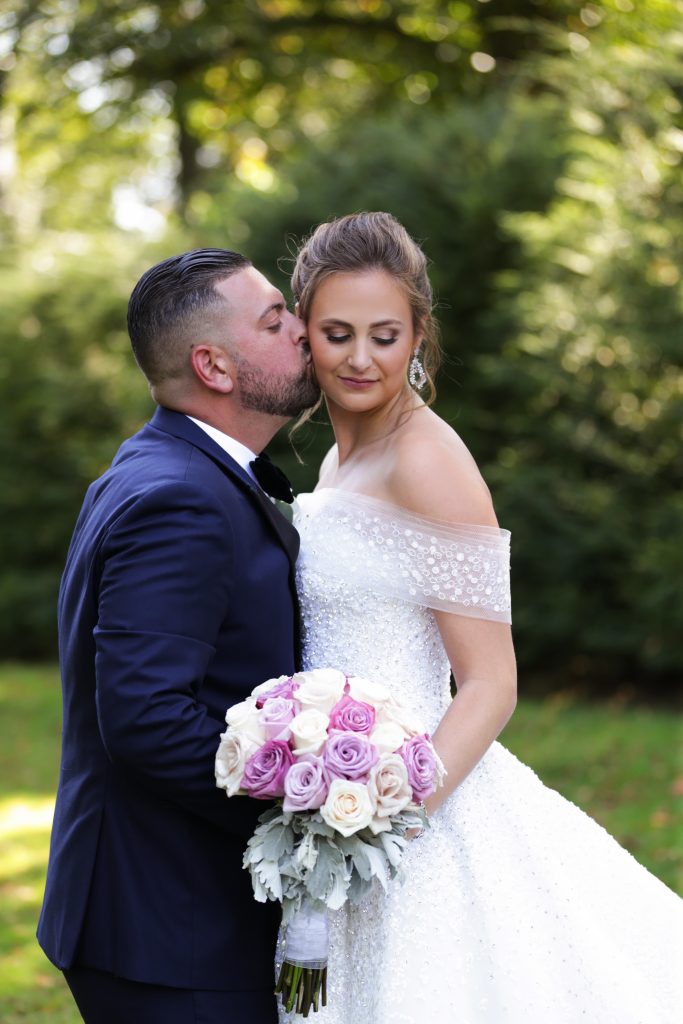 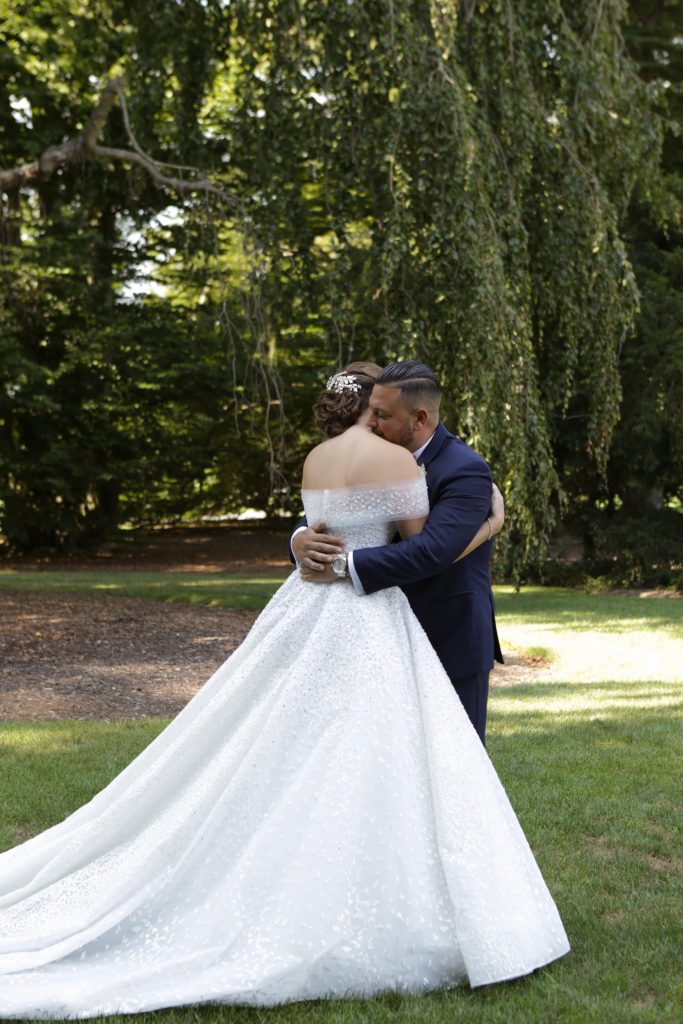 When did you get engaged? Tell us about the proposal!

We went to dinner at our favorite steakhouse on Long Island–Jimmy Hays Steakhouse in Island Park, on January 7th 2017. This was the day we had a horrible snow storm and it was not the best to drive in/advised not to go out in. Jared was nervous I wouldn’t go to dinner because I hate going out in horrible weather, but he was talking about this for a few weeks and I was like well we have nothing else to do for the night.  When we got there we sat at the bar waiting for a table and I don’t know why I said this but I was like, you’re not going to propose and felt the pocket closest to me and there was nothing there, so then the thought went out of my head.  We sat down for dinner and had a great night. Jared seemed to be eating a little quicker than normal, but again the thought had went out of my head.  It was time for dessert and when it came out the plate said will you marry me and Jared got up and went around the table and got down on one knee.  I of course said yes! A photographer was taking pictures from afar and then our parents came over to greet us.  It was such a blur.  They then told us to go to the bar.  All of our friends and family were there to celebrate with us. 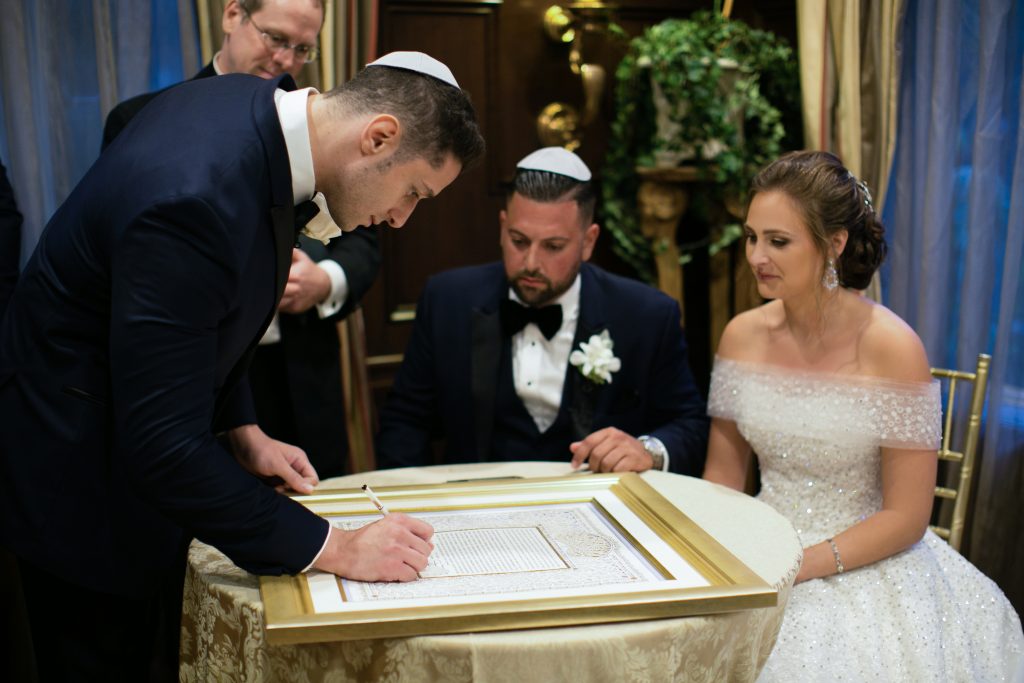 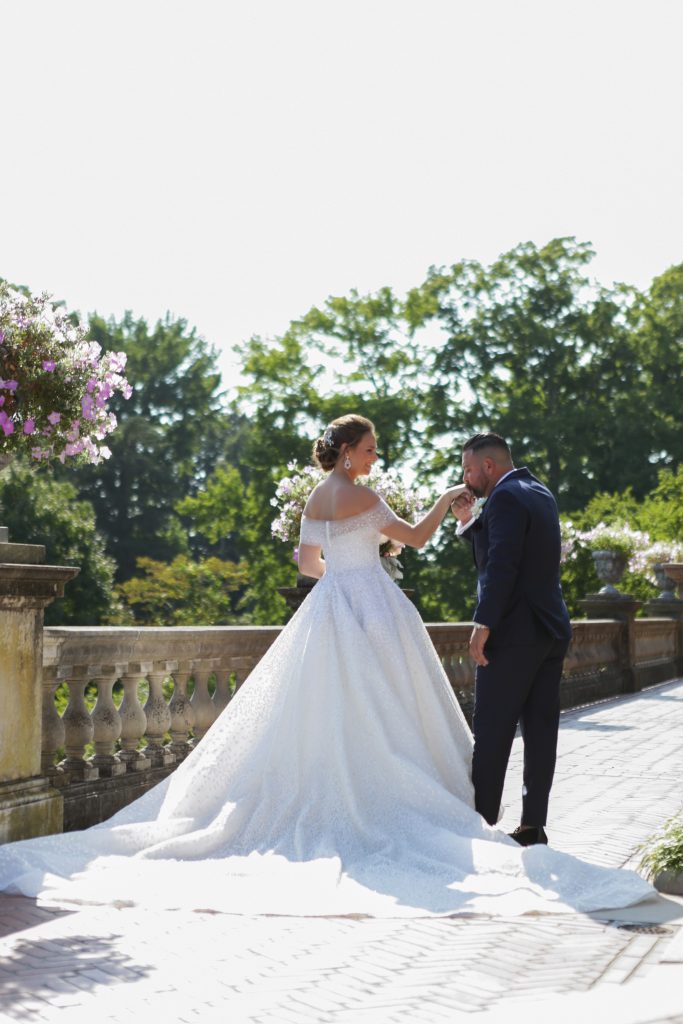 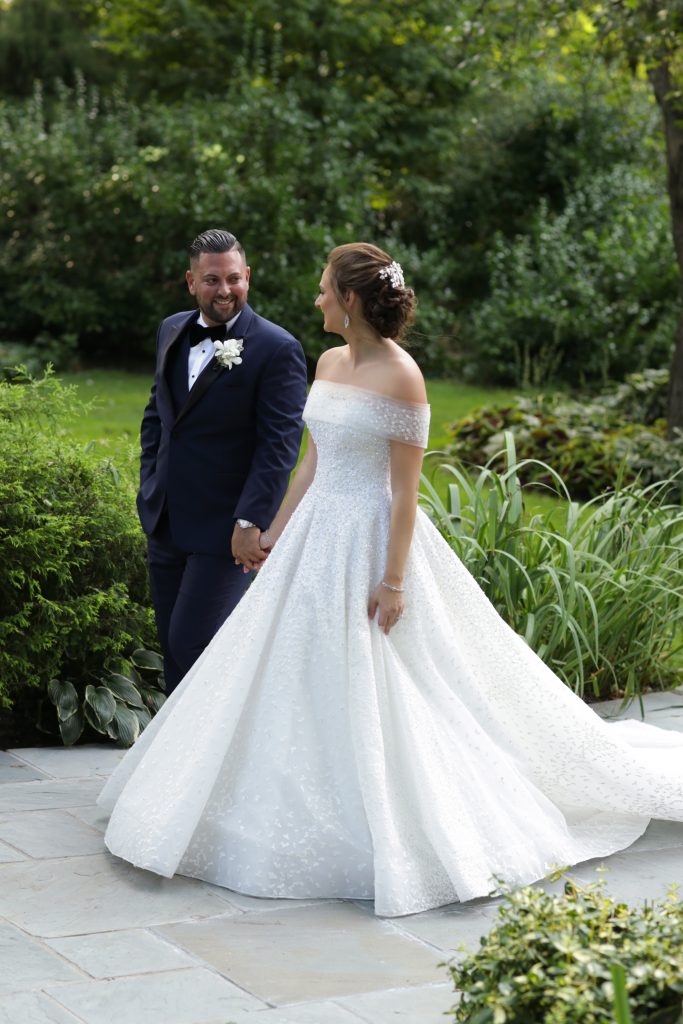 That’s so cute! Jared must have been so nervous.

He was! Jared told me he was so nervous because the ring was in the other pocket when I had asked but only felt the one closest to me. 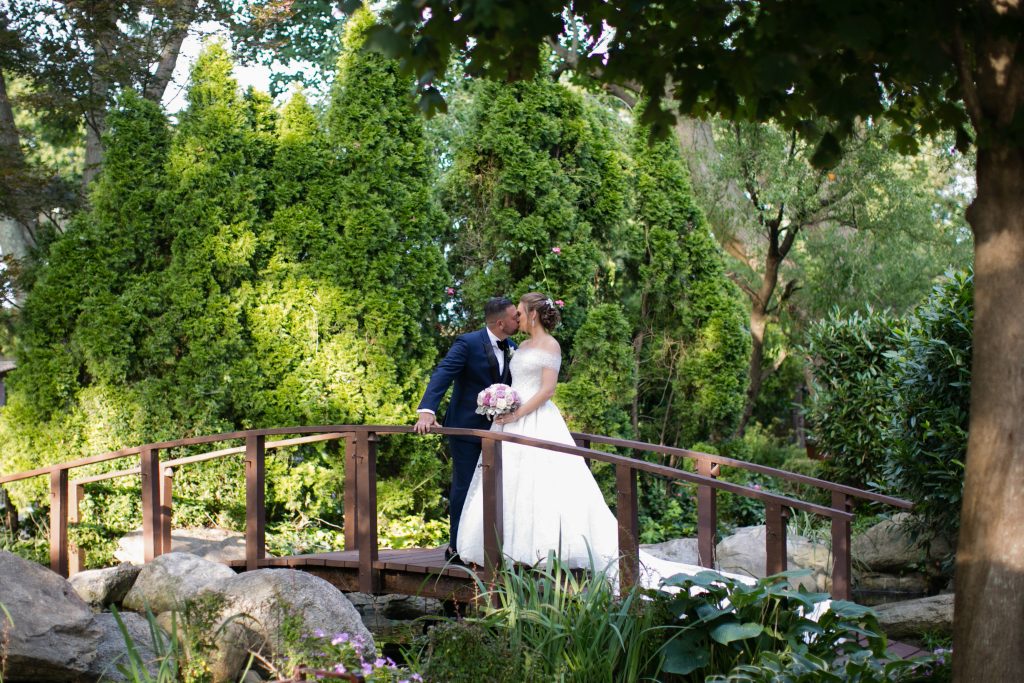 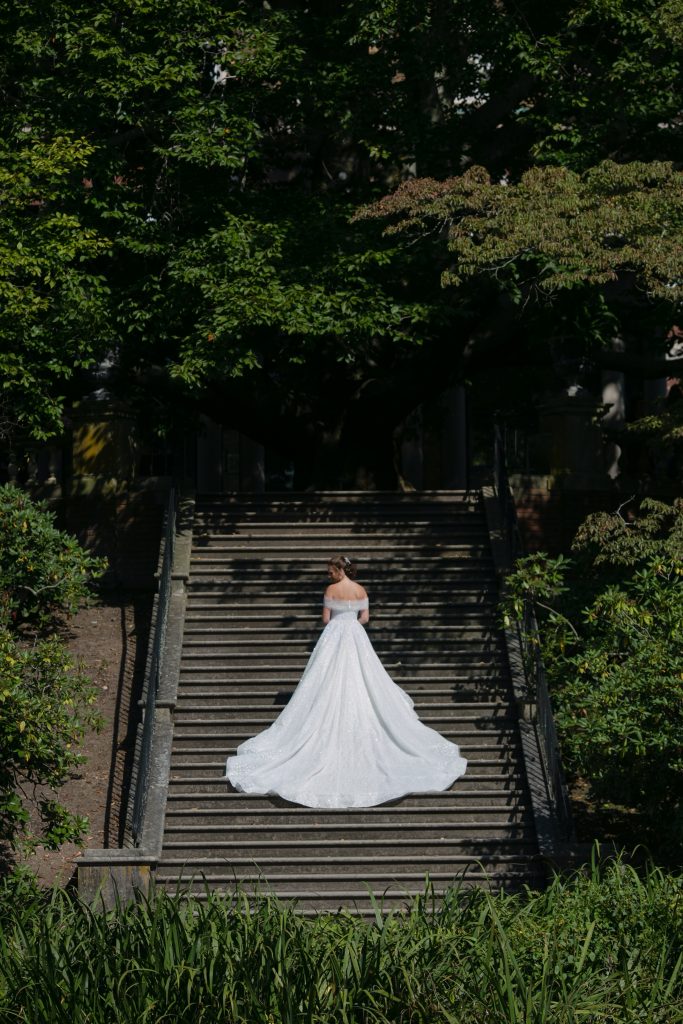 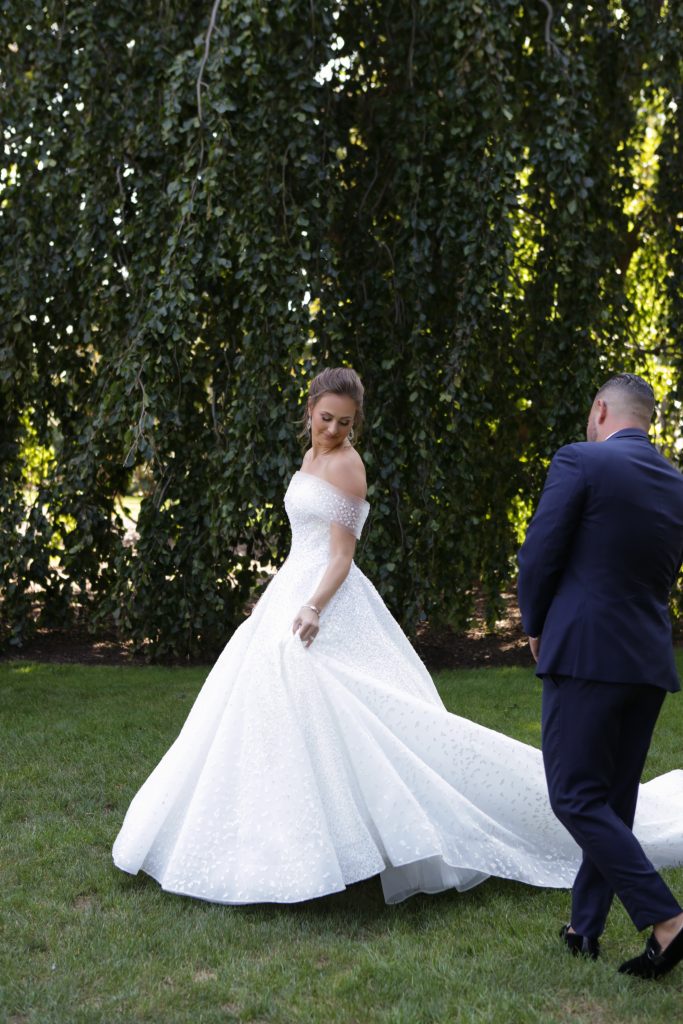 Now comes the fun part. Tell us about the dress! What was your shopping experience like, especially being on the other side of the shopping process most of the time?

I had a few designers in mind, but chose a Tony Ward gown. Since being the Production Manager at Kleinfeld for over 8 years, I work very closely with the designers and had fallen in love with Tony Ward’s designs and he is such an amazing person to work with! I ended my vacation early to fly back to make my appointment for the last day of his Trunk Show December 2017.  It was there he brought in a few samples just for the trunk show. Stella was one of those dresses. 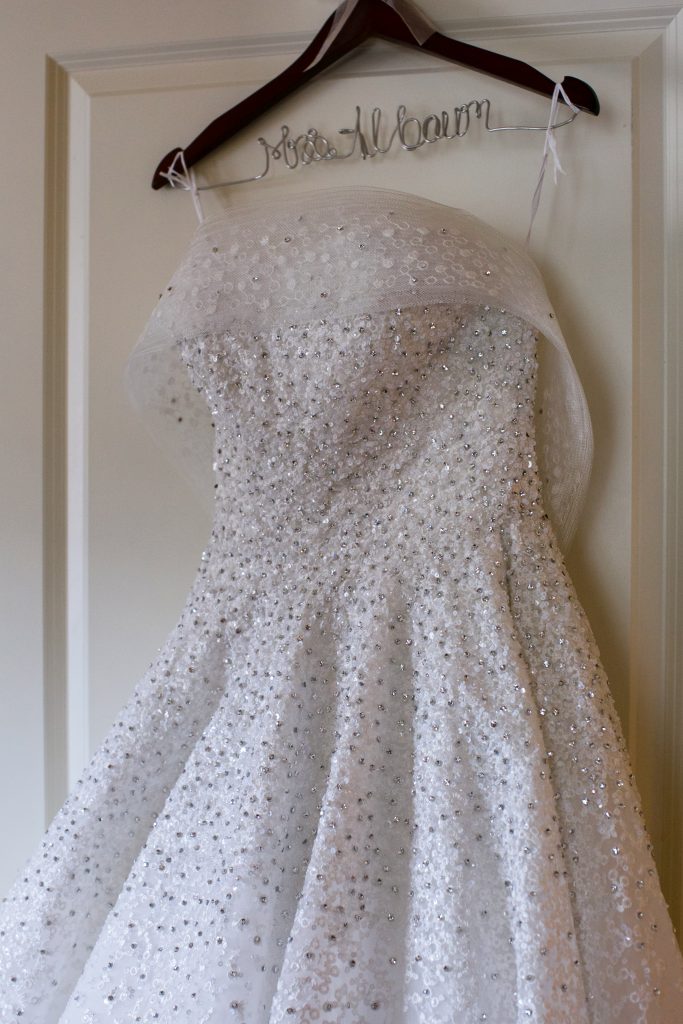 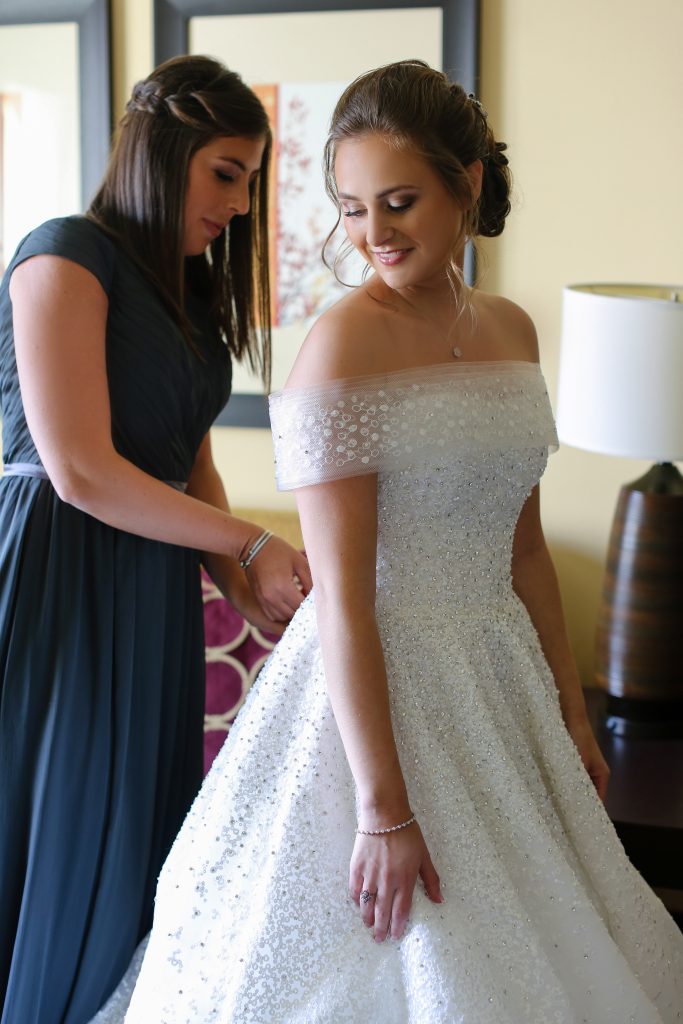 What did you envision trying on that day?

My vision was not originally a ball gown, but Tony insisted I try on this gown.  When I put it on I didn’t know what to think. It was so big and not what I envisioned but when I saw it on I fell in love.  It was just so elegant and the portrait collar gave it a different feel than the typical ball gown.  My mother and mother-in-law to be fell in love as well. 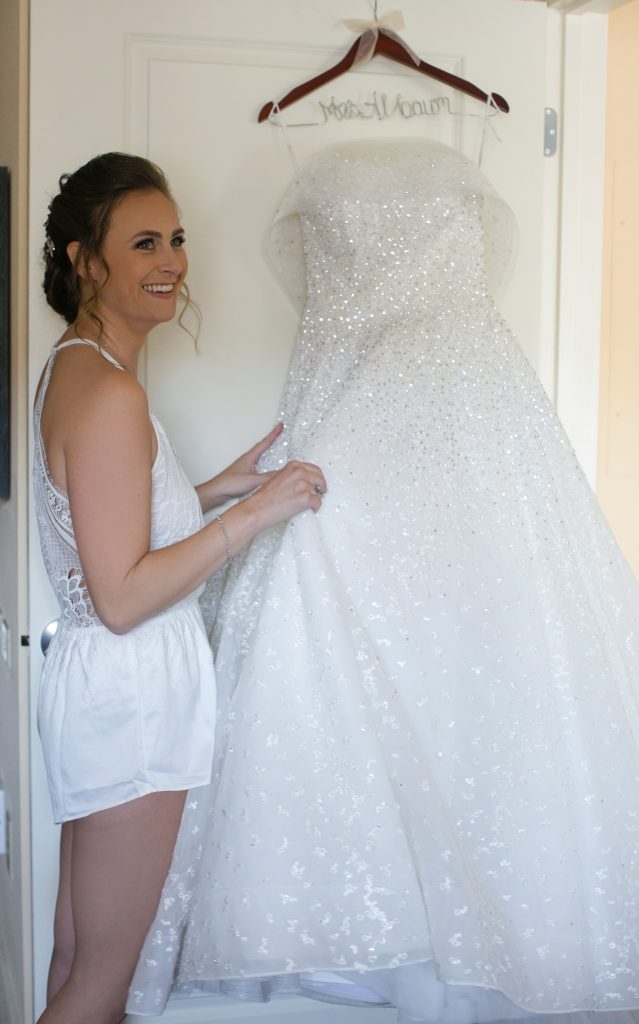 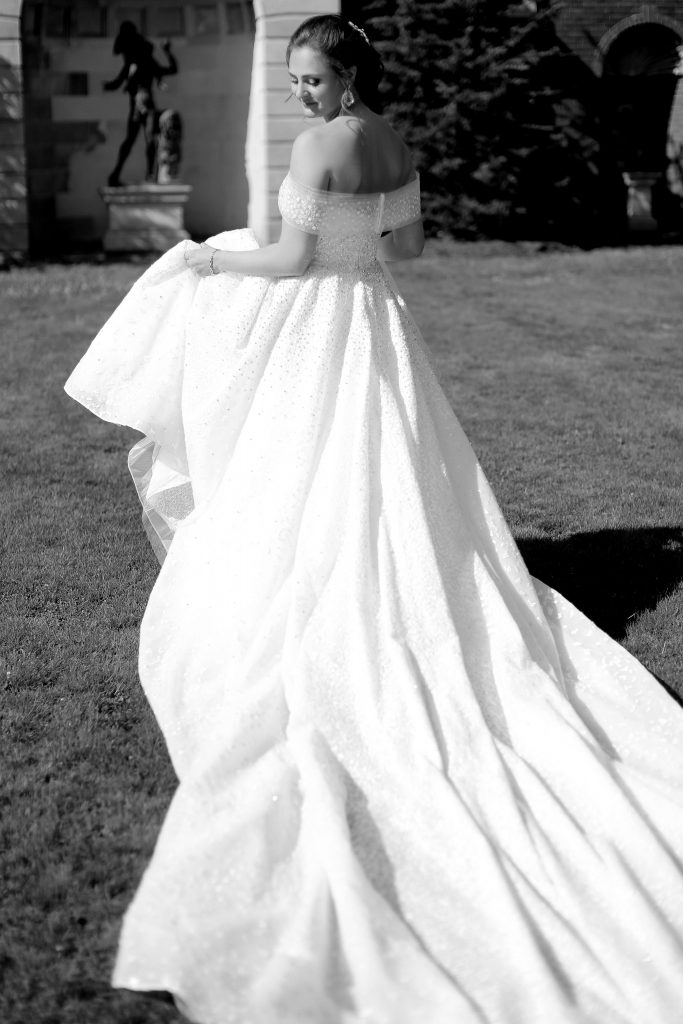 Wow! So I’d imagine you answered the “big question”?

I felt a lot of pressure being in the industry for so long and looking at so many orders and dresses every day, so no, I didn’t say yes. I said to myself, “Could this actually be my dress? Was it that easy?”. I had to think about it after my appointment and kept looking back at the pictures.  Tony Ward was coming back again for another trunk show in February, and in January I found out he would not be bringing that gown that time.  I was so happy I flew in for that trunk show, else I wouldn’t have had the opportunity to try on that gown.

So did you order the dress after the fact?

I decided 2 months later that Stella was my gown at my 2nd appointment. I also picked my 2nd dress as well.   What caught my eye at my 2nd appointment was another Tony Ward gown, Sancia.  I tried it on and instantly fell in love, but the gown had a long train and for the party I wanted something floor length. 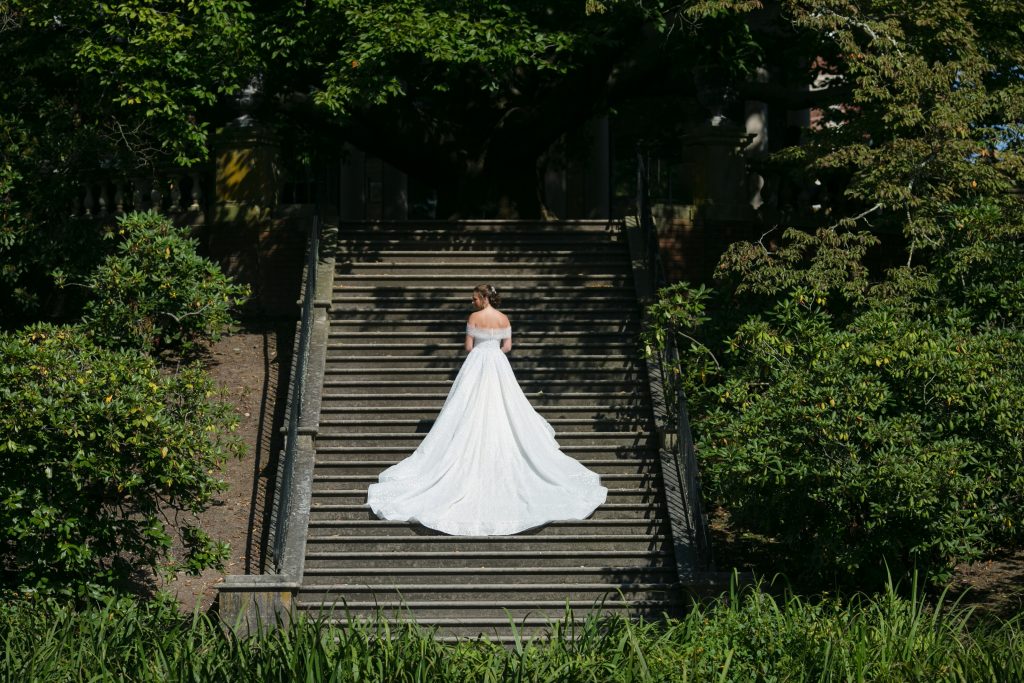 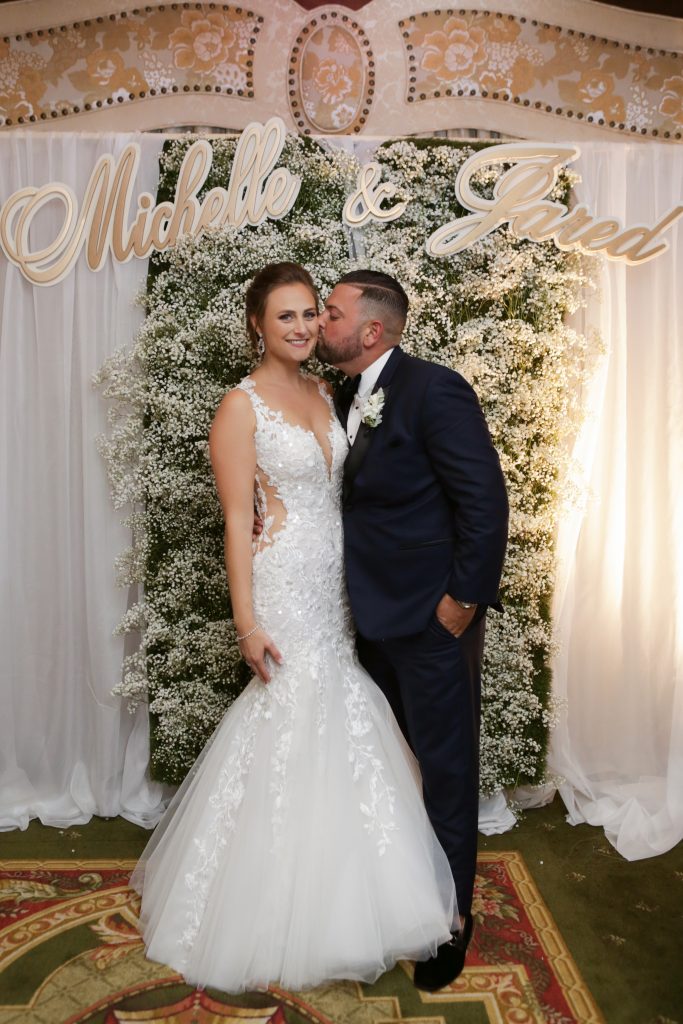 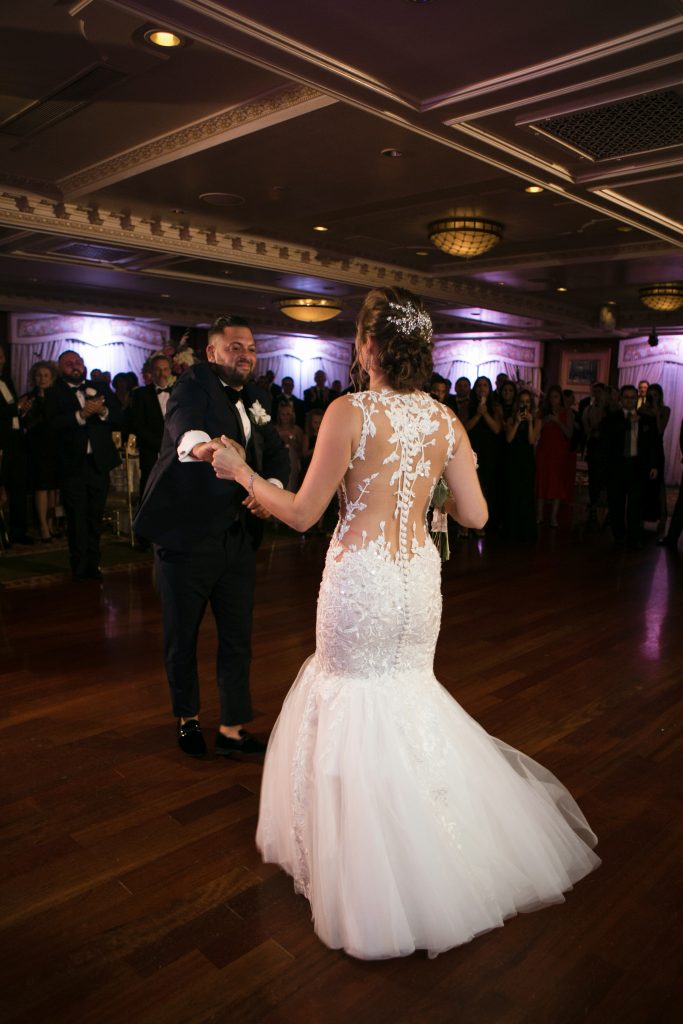 I know that Tony is known for his customizations. But, removing an entire train must have been difficult, no?

Tony ended up customizing the bottom of the gown, by changing the join line to the Malibu style and omitting the train completely.

That’s amazing! How did it feel finally saying “Yes!” to your own gowns after helping thousands of brides over the years?

It felt amazing. My first gown made me feel elegant and like a princess and the 2nd dress was the sexy party dress. It also was indescribable having my 2nd family (Kleinfeld) there, as well as my consultants, Shay and Debbie, when I said “Yes!”. Loreta also worked so closely with me during my fittings and I couldn’t thank her enough. 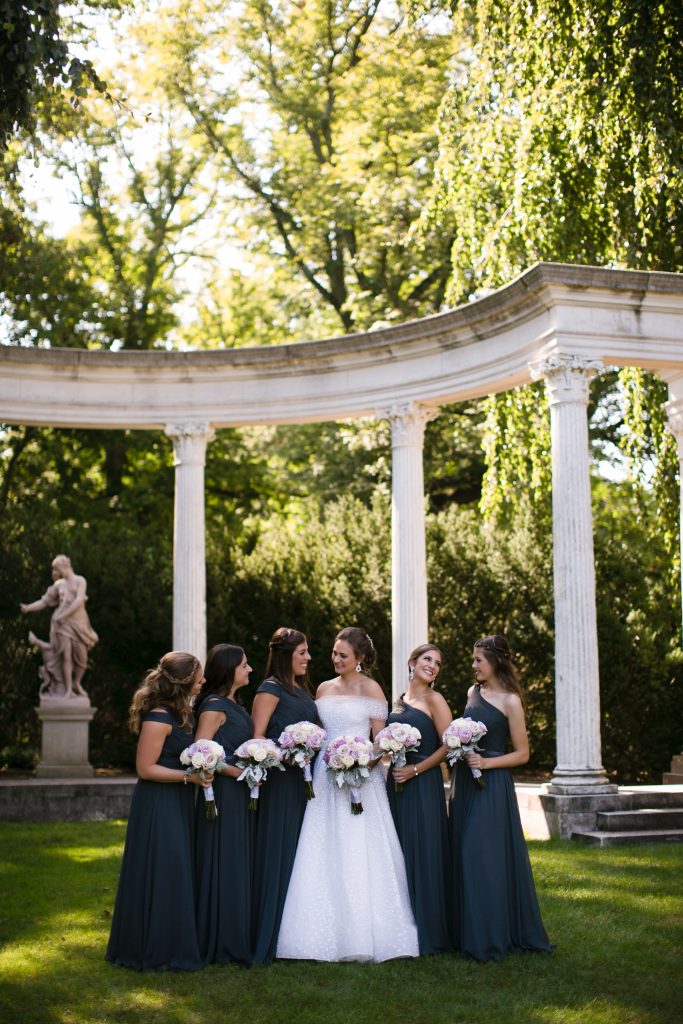 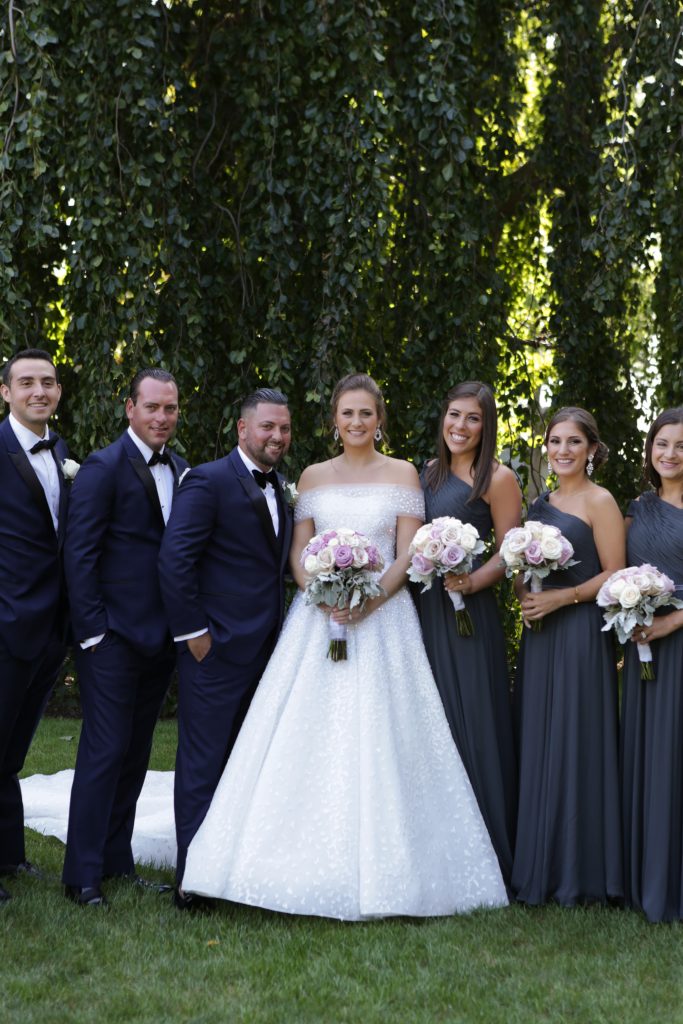 Fast forward to your wedding day. Who was in your bridal party?

We got married on September 1st, 2018, and I had a total of 5 in my bridal party. Marley, my matron of honor, and bridesmaids Rachel and Leah are my best friends from college and my cousins Rachael and Sarah were also bridesmaids. The cutest part was that my flower girl, Ariella’s birthday was on my wedding day! 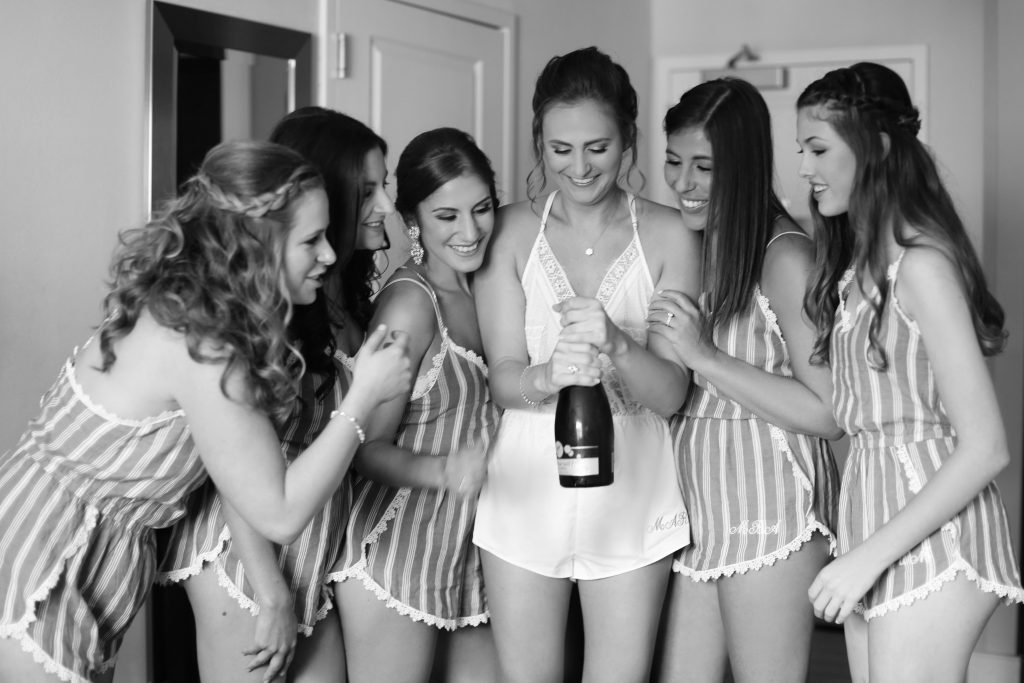 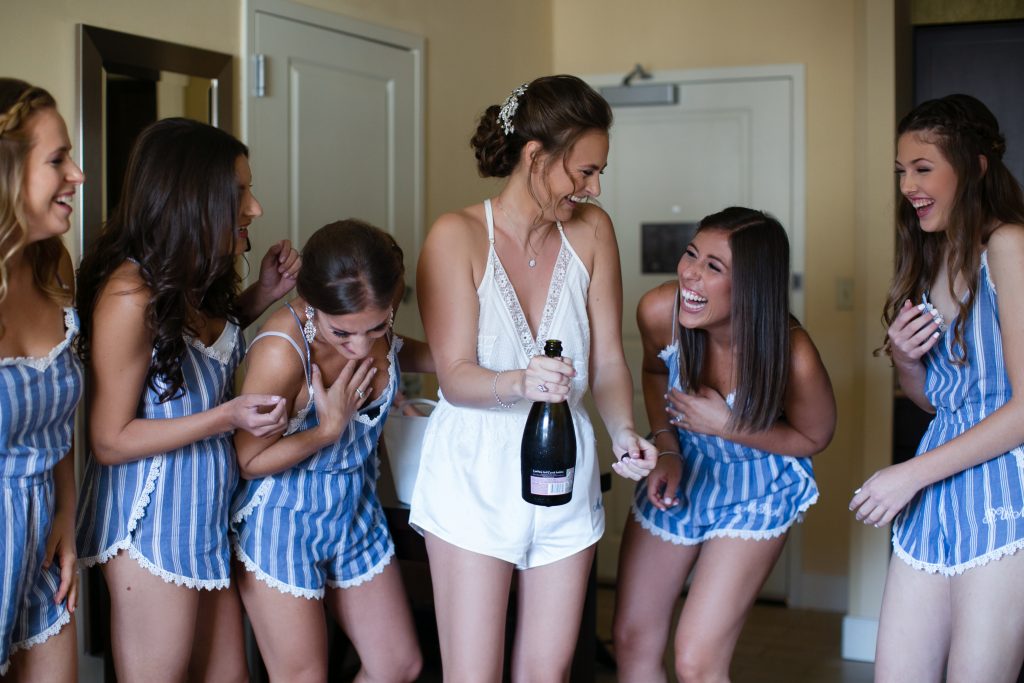 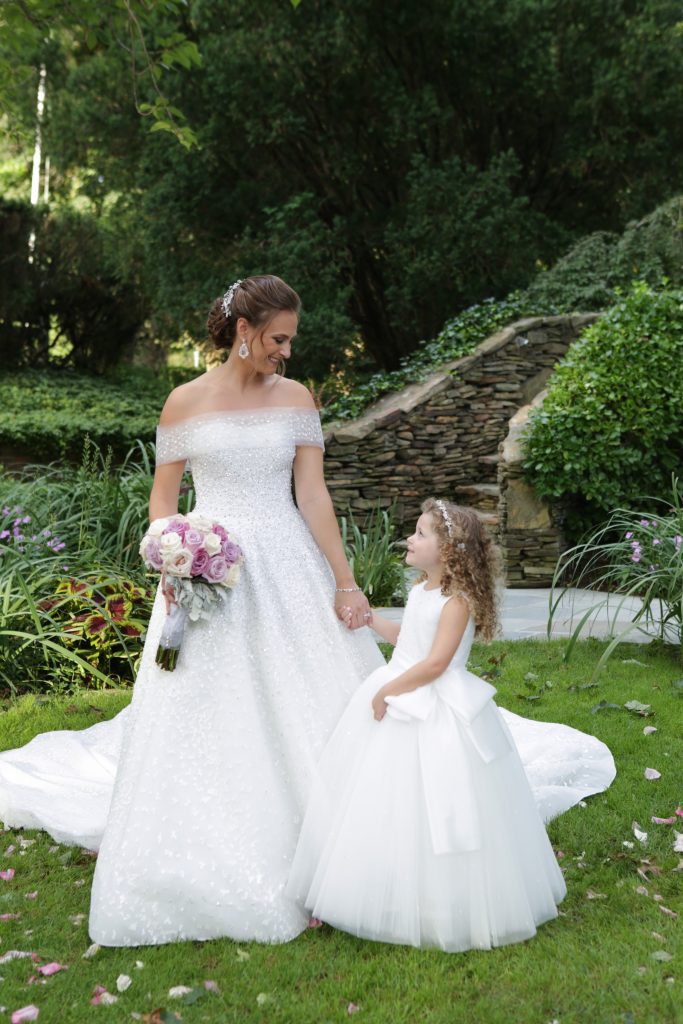 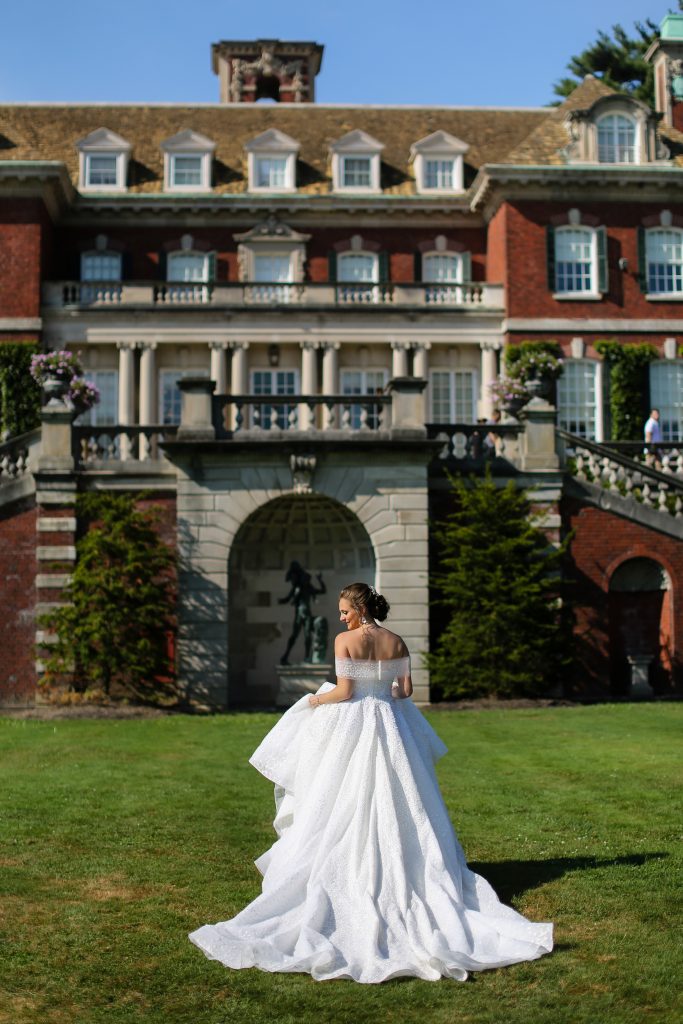 That’s so special that you share that day together! Anything particularly funny happen while getting ready?

If you’re going to have a champagne toast while getting ready, know how to open the bottle!  My MOH bought me the same kind I liked during my bachelorette party and I opened that no problem! This one they changed the bottle and it took me a little bit of time to figure out how to open, that’s why our reactions were so priceless as we didn’t know when the “POP” would be coming! 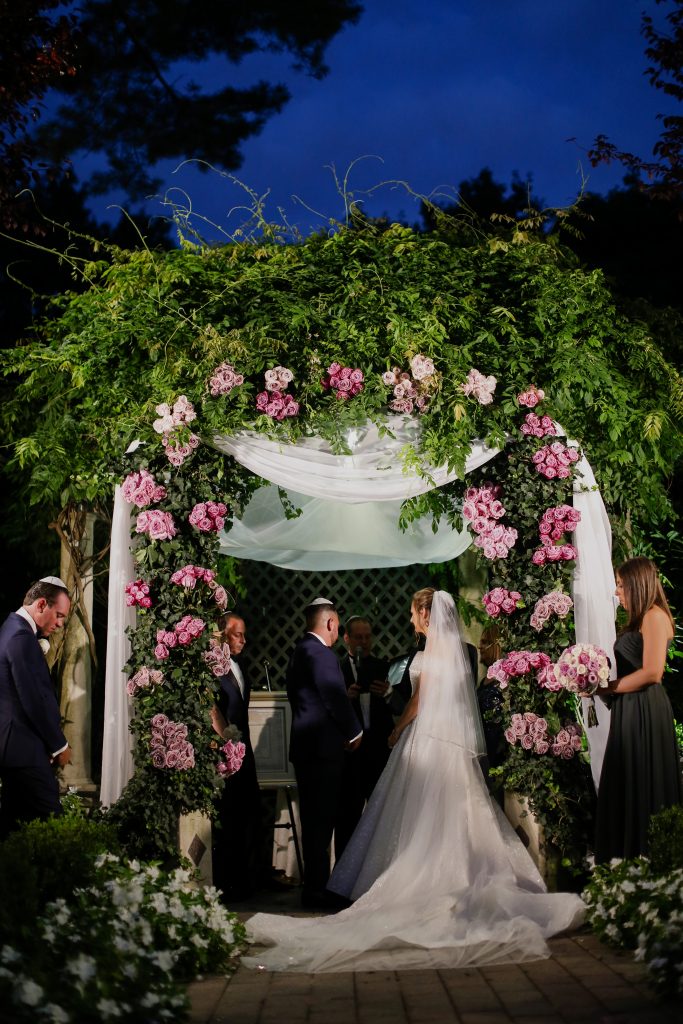 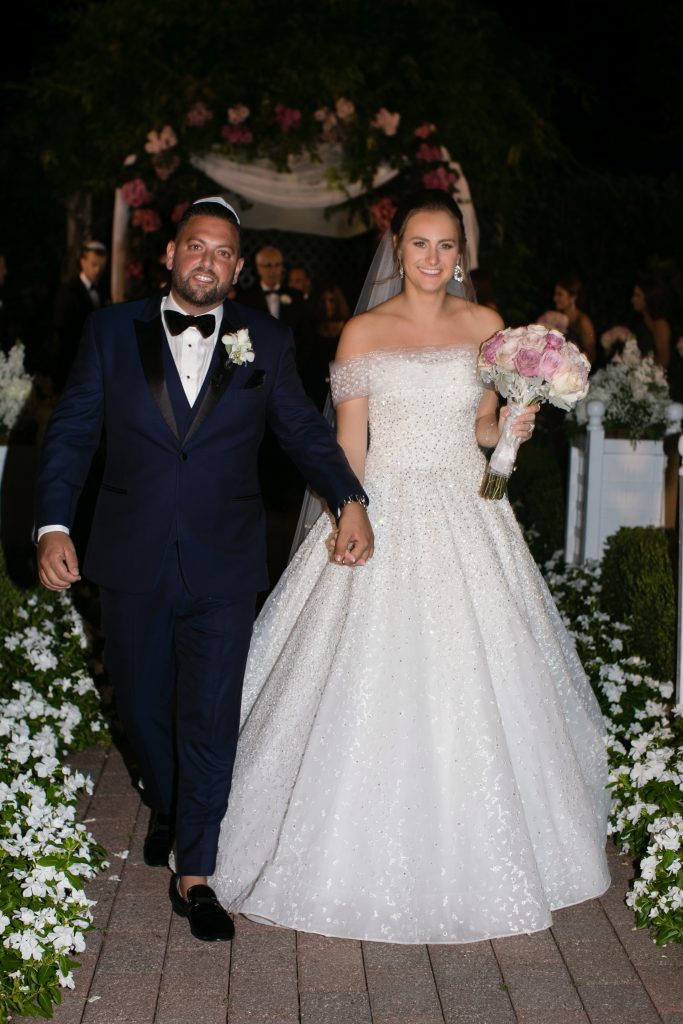 Your ceremony looked gorgeous—how did it feel walking down the aisle?

It was so surreal walking down the aisle. The day and moment had finally arrived after a year and a half.  I felt like a princess marrying her prince with all of the people that had such an impact in our lives watching.We got married under the chuppah outside on Westbury Manor’s property. It was a fairytale and ended up being the most perfect night, as the forecast said rain for my wedding day the entire week of, but then on Friday, the night before, it changed. 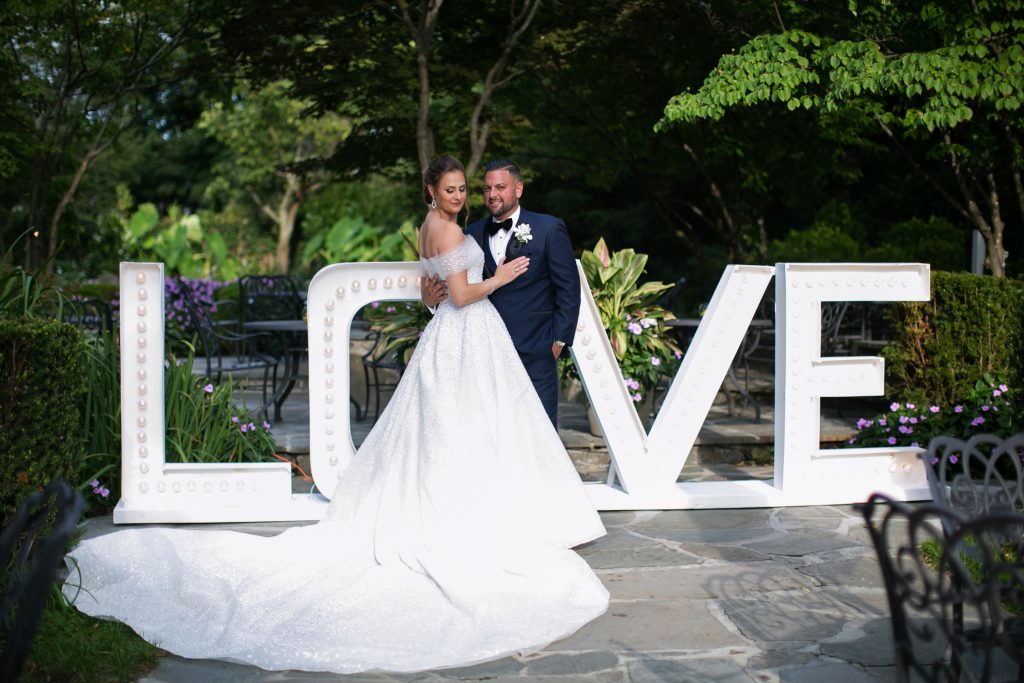 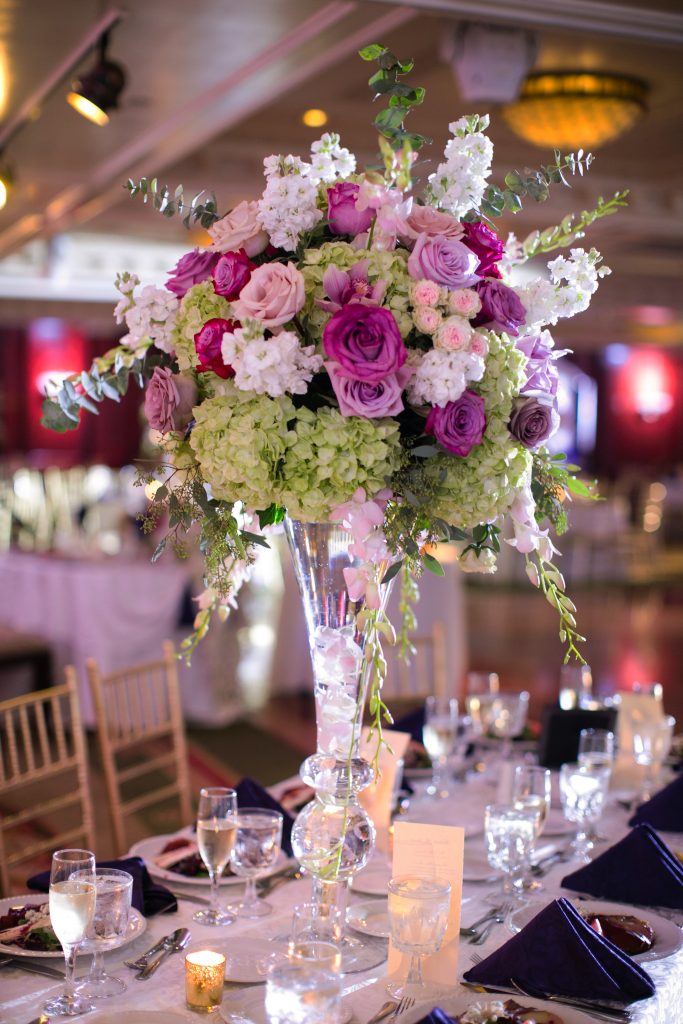 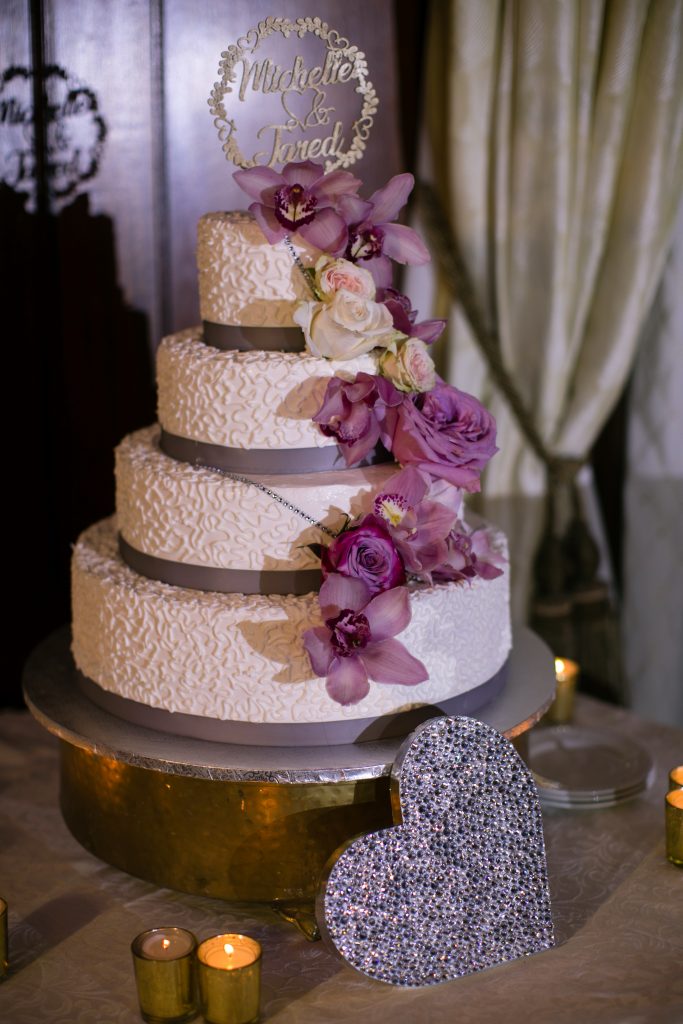 It was meant to be! What about your reception? What was your favorite part?

The reception was full of food and dancing. My favorite part was our first dance, dancing as husband and wife for the first time to Dan and Shay’s “From the Ground Up”.  It was one of the only times during the night we really got to take in the moment and just focus on each other. Also it was really sweet, Jared brought in a “LOVE” sign to the garden area and took me there to show me how much he “LOVES” me.  It was really cute <3 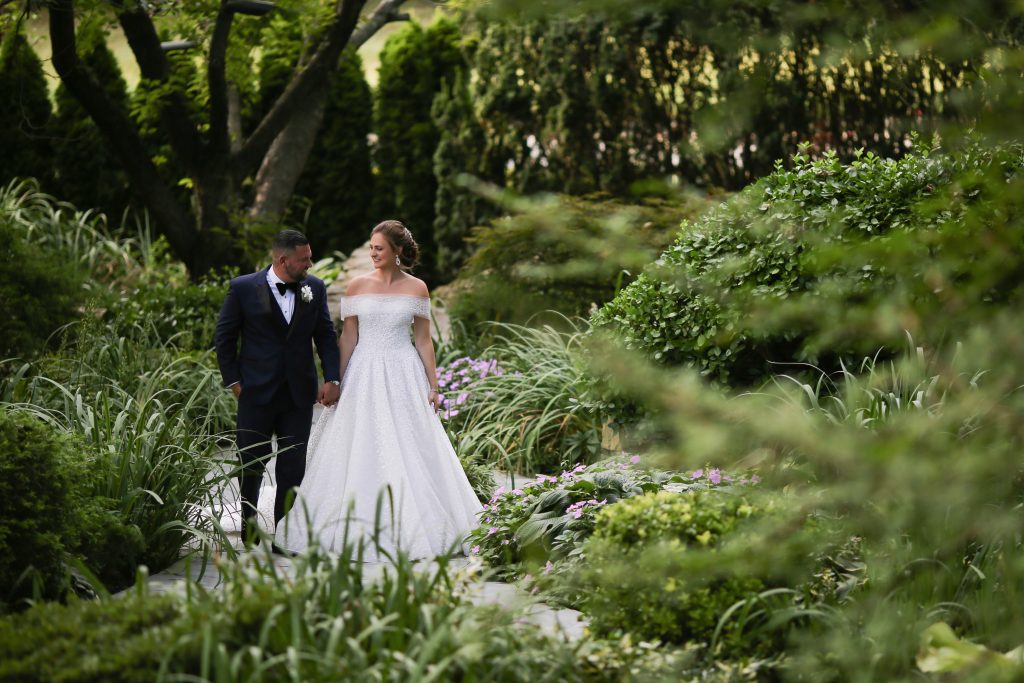